Where is Forrest Fenn's treasure hidden? Solution: The clues and answers to the riddle of the 'treasure poem' for the 'Thrill of the Chase' treasure hunt.


I have solved the riddle of the poem using a secret code-word. I'm confident I now have 95% of the directions to the treasure chest.

Forrest stated in a radio interview that I (Andy Briggs) had figured out most of the puzzle.  The link is here. The relevant comment starts at 6 mins 28 secs.

When I unlocked the riddle a secret set of directions were revealed.  These say:


It was apparent that Forrest had deliberately missed out part of the directions, so Searchers had to look at a source referenced by the poem to obtain the missing part.

I have found the missing part of the directions, but I'm struggling to interpret this part to pinpoint the exact location of the treasure chest.  I believe I have navigated through nearly all of the layers of ‘security’ and deciphered 95% of the riddle but haven’t been able to crack the final bit.


But I'm close.  The deciphered directions reduce the size of the search area to a relatively small section of one of the national forests in the Rocky Mountains of the USA.  I am confident the exact location of the treasure chest will be found when someone can add the correct last 5% of the directions to the 95% I've revealed.

Can you solve the last part of the riddle?


I am  sharing this solution with other Searchers to see if they can solve the missing part of the directions.  New people are required to provide a fresh interpretation to the last 5% of the riddle.


I have written an e-book called ‘Title to the Gold’ showing my solution .  I would be delighted if  this enabled another Searcher to find the treasure chest and claim the items of treasure described by Forrest reportedly worth ~ $1-4m.  I would be thrilled to have played a part in the find.
Within the e-book I have included some of my own interpretations but other Searchers with fresh eyes may see something that I’ve missed. New Searchers may have a different approach to the last 5% of the directions and their interpretation may take them straight to the treasure chest.

This e-book explains my decryption of the poem and highlights the secret message revealed giving the set of directions to the location of the treasure.  Click the picture of the book cover below for the link: 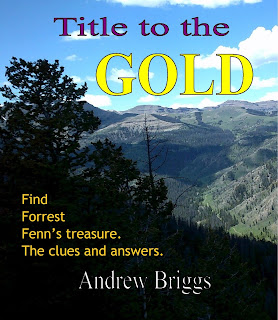 The statements, answers, deductions, evidence and conclusions within this e-book  and on this blog are based on my own opinions and my own work.  There has been no input from Forrest Fenn or anyone else involved in the Thrill of the Chase treasure hunt.
Posted by The White Knight at 10:21 34 comments:

The answer to Clue 5: The Blaze.

Three of Forrest's clues are based on cartoon characters who have associations with the 'wild west'.  Take a look at the paragraphs below.

Forrest mentions the novel The Last of the Mohicans many times in his videos particularly in the two bookshop videos where he draws our attention to this book and notes that ‘illustrations speak louder than words’.

﻿﻿﻿﻿
I believe the blaze referenced by Forrest in his poem is the tattoo on the chest of the character ‘Uncas’ in this book.

Forrest has mentioned turquoise a lot in articles / videos and in one video mentioned earrings with 'turquoise turtle' figurines.


In the Searcher blogs (Forrest’s Scrapbooks e.g. Scrapbook 104) Forrest used the word ‘emblazoned’ a number of times in his posts and articles.  This is how the blaze is mentioned in the book The Last of the Mohicans;  ‘The turtle tattoo was emblazoned on the chest of Uncas.’


Forrest used the word emblazoned somewhat out of context to describe designs formed as part of a metal casting process, for example:


In an article for California On Sunday he was quoted as saying:  ‘----- words emblazoned upon some of the brass bells’


The book Exploration of New Mexico by Espejo detailed by Forrest in his Book Collecting video describes a Province called ‘Maguas’ and a tribe of Native Americans called ‘Mohoce’.  Again, these references direct Searchers to look at the book  The Last of the Mohicans.


Similarly, in the same video Forrest highlighted  the poem Idylls of a king by Tennison.  This poem mentions ‘Hawkeye’, another character from the book The Last of the Mohicans.

Forrest stated that the 'Blaze' does not face North, East, South or West.  This is because the Blaze is shown on a page within a book.  It is not a geographical object.


I believe the answer to this clue is ‘Turquoise Turtle’.
﻿﻿

My email address is:

Many media references can be found on Dal's site:

Posted by The White Knight at 10:18 No comments:

The phrase ‘Tarry Scant’ stands out in the poem because the two words have an odd structure within the flow of text.  Their positioning suggested that Forrest had tried hard to conjoin them while maintaining the rhythm of the poem.  There would have been other ways he could have achieved the same meaning, with the same poetic metering, for example ‘do not stand in marvel gaze’or 'tarry for scant while to gaze’


I believe that Tarry Scant is rhyme for Cary Grant.  The character of Cary Grant appeared once in Marvel Comics (‘with marvel gaze’) where Spiderman was unmasked as Cary Grant.


The actor Cary Grant is mentioned in the Foreword to Forrest's book Seventeen Dollars per Square Inch.


Forrest has mentioned the novel Catcher in the Rye on many occasions.  This book influenced him to write his memoirs.  The name ‘Cary Grant’ stands out as a random reference within the text of Catcher in the Rye.

In Scrapbook 178 Forrest talked about meeting Cary Grant at the Fenn gallery in Santa Fe.  The piece was accompanied by a picture of Cary Grant.  Forrest stated the film To Catch a Thief starring Cary Grant was one of his favourite movies.


In the Moby Dickens bookshop video, Forrest in addition to mentioning Catcher in the Rye mentions the actor ‘Clark Gable’.  Clark Gable was a contemporary of Cary Grant, with the same initials.


I believe the answer to this clue is ‘Spiderman’.

It seems the line in the poem ‘look quickly down’ is there to justify inclusion of the subsequent (somewhat jarring) line ‘tarry scant’.  At first glance many readers may have concluded the opposite was intended.


I have previously indicated that some of the clues in the poem reference cartoon characters.


I believe the use of comic characters and characters from illustrated books is the basis for what Forrest referred to when he made the statement ‘kids may have an advantage’ in relation to the Chase.

Clue 7 : So hear me all and listen good

‘So hear me all and listen good’

I believe everyone would have identified this clue if Forrest had  said ‘now listen up and listen good’.

The quote is attributed to the actor John Wayne.

My answer to this clue is ‘Rooster Cogburn'.

It's apparent that Forrest has provided a lot of confirmatory information for this answer:

On the searcher blogs (Scrapbooks 50 & 53)  Forrest published two items from a searcher who had  a pet rooster called ‘John Wayne’ accompanied by a picture of a rooster.

The subject heading of Scrapbook 175  is 'Iron Rooster' including a picture of a rooster.

The whole of Scrapbook 193 discusses an email from a Searcher called 'Rooster Cogburn'.

A book called Rhymes from a Round up Camp highlighted  extensively by Forrest in his book collecting video was written, as Forrest says, by Wallace ‘Coburn’ and illustrated by Charles  ‘M’ Russell .  The ‘M’ stands  for ‘Marion’,  John Wayne’s real first name.

The cover of Forrest's book Too Far to Walk has a shadowed figure on the front sleeve.  This (hat wearing) shadow figure fits the profile of Edward S. Curtis the photographer who specialised in studying native Americans.  The native Americans called him ‘Shadow Catcher’. Curtis’s middle name was ‘Sheriff’. As Forrest said ‘Only the shadow knows’.

Forrest also mentioned John Wayne in Scrapbook 84 and again in two stories for the publications Newsweek and Altered Dimensions.

So in several locations Forrest has hinted at:

It seemed very likely that Forrest brought these references to the attention of Searchers deliberately to be used as hints, particularly as many of the references were included within a small section of one video sponsored by Forrest.


The first clue is 'Where warm waters halt'.


I believe this clue refers to the place where  the Warm Springs Apache chief Victorio and his men were halted by the US cavalry in their attempt to get North within New Mexico.  The US cavalry waited for them at the last watering hole going North at  a place called ‘Rattlesnake Springs’.


The answer to this clue is ‘Rattlesnake Springs’.


The 'warm springs' association seems to be confirmed  on the blogs (Forrest's Vignettes) where Forrest actually mentioned 'Warm Springs Apaches' in an article,  something of a giveaway.


The word 'waters' was pluralised because it was referencing a plural subject.   Otherwise, probably Forrest would have said 'where warm water halts'.

The answers to the clues do not map out a point-to-point geographical journey.  However, each answer is very important.

Email ThisBlogThis!Share to TwitterShare to FacebookShare to Pinterest
Labels: clues, Forrest Fenn, solutions, the Thrill of the Chase

Clue 2: The home of Brown

I believe Brown is ‘Buster Brown’.  This was a cartoon character invented by the Brown shoe company.  A real life boy named Richard Barker played Buster Brown n the shoe adverts.  Richard in later life set up a homestead in the valley of the  Little Snake River.

The home of ‘Brown’ answer is ‘Little Snake Valley’.

It seems that confirmation for 'Buster Brown' was given in Forrest’s ‘books’ video where he highlights a book about Frederick Remington’s work.  One of Remington’s most famous sculptures was called The Bronco Buster. Forrest owned this sculpture for a while.

Forrest hinted at 'Brown shoes' in Scrapbook 130 where he included several pictures in the piece, all close-ups of 'old brown shoes'.

To the best of my knowledge the clues and answers here have not been published in any other form apart from being detailed together with the rest of the solution within my ebook.

The statements, answers, deductions, evidence and conclusions within this blog are based on my own opinions and my own work.  There has been no input from Forrest Fenn or anyone else involved in the Thrill of the Chase treasure hunt.

Email ThisBlogThis!Share to TwitterShare to FacebookShare to Pinterest
Labels: clues, Forrest Fenn, solutions, the Thrill of the Chase
Home
Subscribe to: Posts (Atom)

The White Knight
Follow this blog if you want to know the solution to Forrest Fenn's treasure hunt.